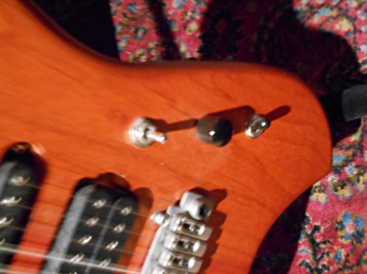 The project started off with a basic design idea.  I always thought that the Fender Swinger was a very cool looking guitar that could have been a real contender if only they had tried to really do something with it.

They only produced a few hundred of them.  As you can see, they weren't terribly well equipped.  But a cool looking and very ergonomic body style, coupled with a great headstock design, gave them lots of potential.

I was also interested in doing a build with a Wilkinson balanced tremolo.  I loved the light weight (compared to other balanced tremolos like the Floyd Rose series), as well as the fact that it was free-floating, rather than locked.

The arrowhead headstock is an easy one to carve, but the body is a difficult shape.  I decided to buy the body pre-routed but unfinished.  One piece Alder.  Excellent tonality.

When I got the body and started preparing it for finishing and fitment, I decided that I was so in love with the project that I would be building a custom guitar for myself.  I had recently finished Rhonda, which was meant to be a personal player, but decided that this would be instead.

When I dyed the body the division of color (red orange/orange), I decided to name it "Brandi".

A padauk neck with a pau ferro fretboard were special ordered for the project.  It's topped with medium jumbo frets, no inlays, and Hipshot locking open geared tuners.

The neck shaft is made of padauk, which is a wood that has a natural deep red color.  It has a fairly open grain, and yet is as dense as many closer grained woods.  It's also naturally a bit waxy, which makes it very smooth, even silky when polished.  Incredible playfeel.  The pau ferro fretboard evens out the tone.

The Wilkinson tremolo (a WV100 made by Gotoh) handles with an amazing response and smoothness.  I've never played a better tremolo bridge, and I've played most.  Even though it doesn't lock the strings, it stays in tune perfectly for weeks at a time. A low friction nut (Brandi's is polished brass, for loads of extra sustain as well) helps immensely.  I've also used graphite nuts and roller nuts with Wilkinsons with great success.

The stringpath is specially built for sustain and a bright ringing tone.  Starting with Fender bullet end strings, the string ends fit very tightly into the bridge.  From there, they pass over titanium finished steel saddles, and finally, the brass nut and the tuners.

The pickups are tremendous.  I love HSS (humbucker bridge pickup, with single coil mid and neck pickups) configurations for the balanced and broad tonal palettes.  Filling the bill are some very nice DiMarzio pickups.  A "Super Distortion" humbucker in the bridge makes a powerful "anchor".  The mid pickup is a reverse wound SDS-1, and the neck pickup is a forward wound SDS-1.  Used together, they cancel noise just like a dual coil (humbucker) pickup.  With my "hierarchical" switching scheme, you can even play the guitar as though it had twin humbuckers.

The top selector switch selects between the neck and mid pickups, and also allows them to be used together in the middle position.  The bottom toggle switch likewise selects between the single coil pickups, the humbucker, or both.  Each setting opens up its own tonal library.

Speaking of tone, there's no tone knob.  Instead, I used a "bleeder" circuit on the volume control.  This "bleeds off" very high frequencies that would normally be supressed by the tone control.

Did I mention that I do exotic wiring?

All told, Brandi is a joy to play, and I enjoy playing it immensely.  At 7lbs 7oz, it's a bit heavier than I normally like, but that's part of the price of using denser tonewoods.

Questions?  Would you like to have me build your dream guitar?

I'm certainly no master guitarist, but I am "master" of my little shop.

"Brandi" is my personal player. 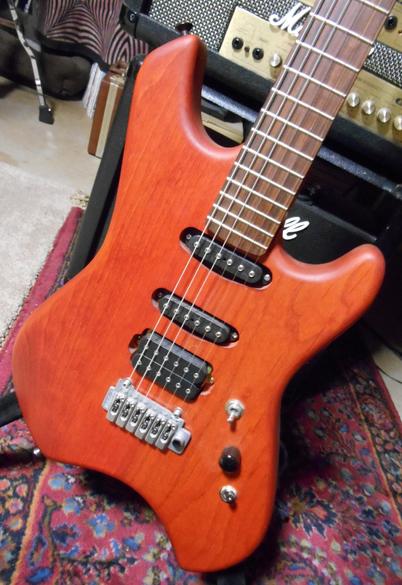 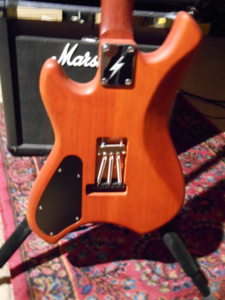 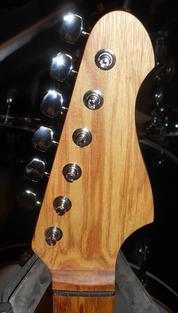 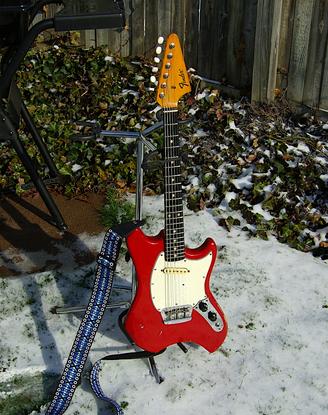 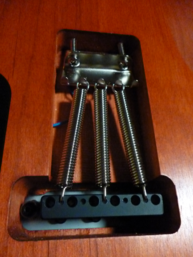